Remember the "good old days" when our parents used to throw us in the back seat (or **gasp** the front seat) and take off for wherever they were going without a care in the world?? Well, now that is not the case! You must agonize over your carseat purchase and feel guilty if you buy less than the Mac Daddy of Carseats. So, as Haley had outgrown her baby seat 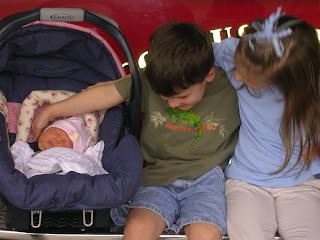 it was time to go shopping!

Well, obviously she has grown since that picture was taken :)
In case you don't believe me, here is proof: 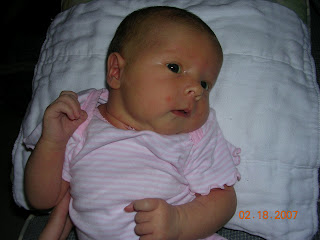 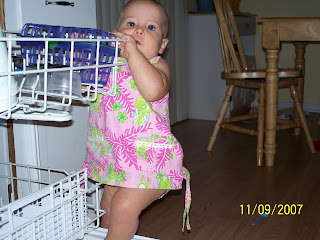 See? Now do you believe me? So, we had to start the search for the new seat! One that would make her happy (yeah right) but more importantly, safe! You see, even when Lindsay and Jared were babies there were only a few to choose from (or so it seemed) and no one had pink ones and such, so you just picked one that met the safety requirements. Now there is a brand (Britax) that costs $300!! Yeah, they are cool, but do you know that babies can be really gross? They get this thing called "Rotavirus" (which is dr. for "diarrhea and puking for 5-7 days straight") and other nasty things that involve bodily functions. So, if there were ever to be a time when the carseat was "uncleanable" I didn't want to be stuck with it since I paid $300 for it! (Not that we have that kind of money to spend on something anyways-but I was tempted for just a minute **blushing**) So, after agonizing (and driving everyone I talk to nuts I'm sure) I decided to get one at Big Lots that was sooo cool! Had all this fancy stuff on it and looked so comfy! Then I found out it did not rate well on safety tests!? What the heck? (If not for safety what for??) So, back to the store it goes. So, here is the one that we ended up with-cute and "they" say it's safe-whoever they are. 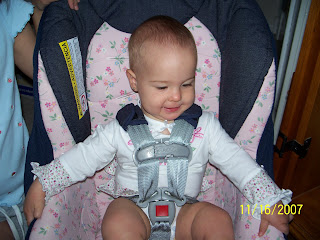 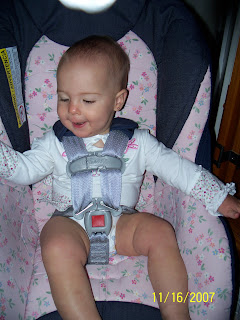 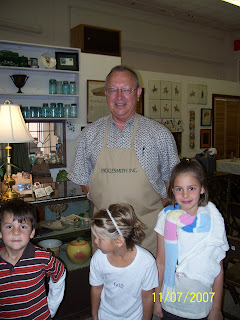 We went on a really neat fieldtrip this week to the Pickle factory! The person in the picture is called a "Picklesmith" he is the head honcho at the pickling factory and was wonderful at explaining to the kids what they do. He inspired us and next year (spring) we are going to try to grow some pickling cucumbers and play around with the process! How cool is that? :) 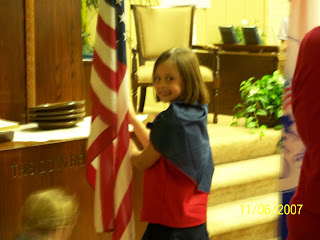 At American Heritage Girls this week Lindsay got to be part of the colorguard! She got to carry the American Flag and put it in it's stand. This was her first time as you have to be in full uniform to get to do this. She looked so cute! I was proud of her! 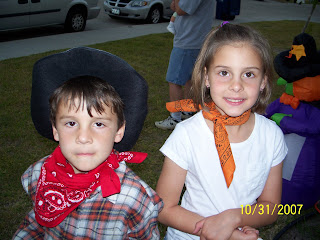 For Halloween the kids dressed up as a cowboy and a 50's girl. They were very good about not asking for expensive costumes. And it was their first time trick-or-treating. The most fun though was that we went to some friends' house and there were lots of kids and lots of good grown-up company! We had fun-and I'm usually a "Halloween scrooge". 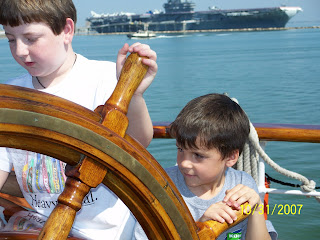 We also got to go on a field trip to see a "tall ship" (that's what they called it) named "USS Elissa". This was a cargo ship from long ago that has been completely redone. It was a neat field trip and the kids really enjoyed it. Here is Jared steering the ship. What fun they had with that! 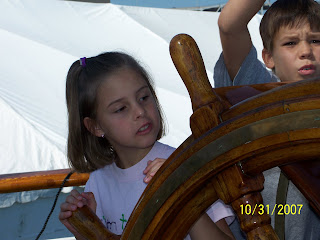 And here is Linds steering on her turn. See, who says we stay home and the kids get no social interaction or variety?? We have lots of fun!!! (We've prob'ly been on 7 or 8 field trips this year!)
Posted by carebear7951 at 8:02 AM No comments: 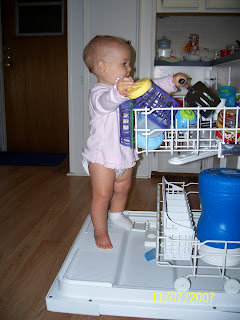 Ever since she's had any choice of where to be Haley has loved playing around the dishwasher...yesterday I turned my back for just a second-and this is what she did! She is standing on the door to the dishwasher playing with a spatula!! 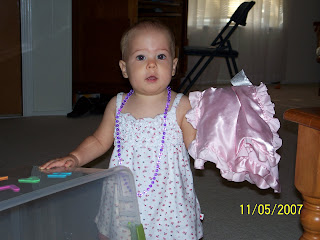 I don't know if Haley loves necklaces or if Lindsay loves to put them on her, but she doesn't seem to mind. (We do take them off before she lays down ;) ) 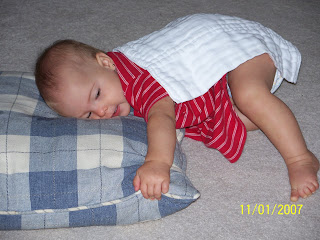 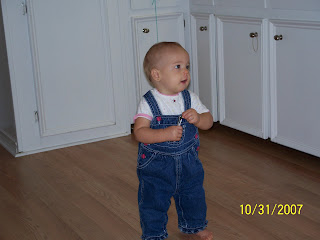 Here she is standing up on her own! This isn't necessarily a new thing, just thought it was a cute picture!

I will do a blog of Jared and Lindsay pics next-when I get a chance!!!
Posted by carebear7951 at 7:47 AM No comments:

I find myself constantly wishing days away and I feel really sad about it when I catch myself. I am always counting the hours until bedtime (or even rest time). But by doing this I am wasting the "stuff that life is made of" and missing out on the blessing of time with my children. I chose to be a SAHM (stay-at-home-mom) and I want to be here and can't imagine being anywhere else-would miss my kids terribly and wonder all day what they are doing and if they are hurt (physically or emotionally) but that's not to say that it's not hard work-and so draining. Everyone tells you you should take time for yourself, but where do you get it? I have found some time lately to run-which is nice to get out by myself.

I pray that God will help me to remember the days when I longed for toys strewn about my house-because there were almost 4 1/2 years when I wanted that more than life itself-literally. I also pray that He will help me to remember what a privelege it is to get the chance to raise 3 children for Him-after all they are not MINE. He has entrusted them to me! I pray that I will not do anything that will scar them for life (or at least nothing that's worthy of being on Oprah in 20 years-or worse, Jerry Springer!) I pray that they will have happy memories mostly-and have amnesia over the tough times-and that I will have that same amnesia! I pray that they all call me because they want to when they are grown and have lives and families of their own. But most of all I pray that they will be happy, well adjusted people one day who love God first and their family second. This is what I want for my children-not to flounder about for years like most of us do trying to find the right way. I want them to know that loving God and serving Him is about a relationship, not a list of rules that they must follow to a "T" or be doomed.

Sorry for the heavy post...I know that usually I try to keep it silly or lighthearted, but this is a big deal to me. My biggest fear in life is to fail as a mother. No other failure affects other lives the way failing as a mother does. I have 3 little people that depend on me to be what they need. Can I???

carebear7951
I am the Chief cook and bottle washer (as well as spiritual advisor,teacher, accountant, child psychologist, maid, mediator, referee, chauffer and entertainment and social activities co-ordinator for a family that now includes 6 people and one dog so add to my list of duties: dog walker. My husband and I have been married for 15 years (since August of 1994). He is my best friend and I wouldn't have it any other way. Since then we have added Lindsay in 2000. That was so fun that we added Jared in 2002. Then, just when things were "smooth" we decided to change it up a little and Haley joined us in 2007. And now presenting our surprise: Nathan! Born in December of 2009. It has been a wild ride learning to parent in "the zone" since Haley was born-when the parental units are outnumbered by the children. And that's what this blog is about. I home school our children so am interested in anything home-school. I also love to scrapbook and read.